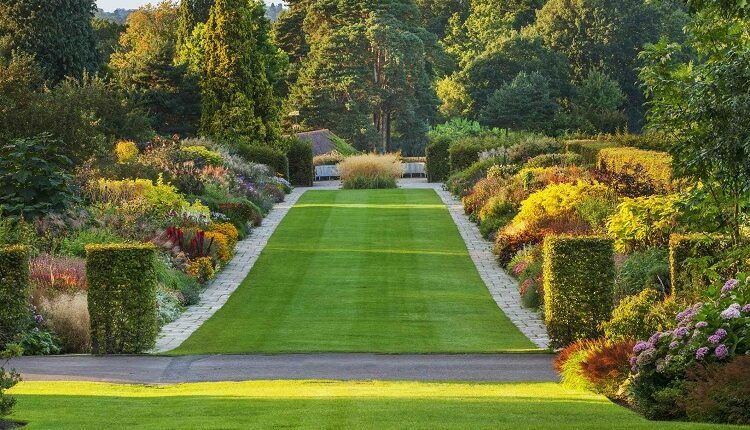 The Castle of Mey Built between 1566 and 1572, The Castle of Mey is located in Caithness, on the north coast of Scotland. The castle had fallen into a semi-derelict state when it was purchased by Queen Elizabeth The Queen Mother in 1952. The grounds occupy roughly 30 acres and it features a 2 acre walled garden that provides much needed shelter from the often brutal North Sea winds. Its existence and prosperity in such an inhospitable location is a testament to the Head Gardener, Chris Parkinson.

Buckingham Palace’s 39 acre garden is the largest private garden in London. Serving as the Queen’s private garden, it is also the location of numerous royal events – most notably the Queen’s Garden Parties which usually host around 24,000 guests each year. The gardens will be open to the public for the first time this year, with visitors able to enjoy a guided walk through the rose gardens, take a seat in the Queen’s summer house and admire the two London Plane trees named after Queen Victoria and Prince Albert. To find out more about British royal gardens – watch this Queen Elizabeth documentary.

The ancestral home of the Lyon family since the 14th century and the childhood home of The Queen Mother, Glamis Castle in Angus, Scotland offers extensive gardens and grounds to explore. The Italian Garden was laid out in 1910 to designs by Arthur Castings and features a raised terrace between two gazebos. With its formal borders and lavish floral displays, it is typical of the Edwardian era.

Sandringham House has been home to four generations of monarchs since 1862 and is currently used by the Queen as a rural retreat. Set in the Norfolk countryside, the estate covers 8,000 hectares with 24 hectares of manicured gardens contained within. First opened to the public by King Edward VII in 1908, highlights include the formal North Garden where Queen Alexandra’s summer house sits above a lake beside a tumbling stream. The gardens have been simplified over the years including a remodelling by Sir Eric Savill for the Queen and Prince Philip in the 1960s. The wider estate also hosts royal shooting parties as well as being used for arable farming and forestry.

Originally a Tudor artillery fortress built by Henry VII in 1539, Walmer Castle in Kent would later become the official residence of the Lord Warden of the Cinque Ports. Holders of this title include the Duke of Wellington, William Pitt and Winston Churchill. Its 32 acre gardens date mainly from the 1790s and 1860s, comprising formal ornamental gardens and parkland. A meadow framed by Holm Oaks forms the approach to the castle where the former moat is now a garden of trees and shrubs. Designed by Penelope Hobhouse, The Queen Mother’s Garden is designed along classical lines with influences from Islamic garden design.

Osborne House on the Isle of Wight was the holiday home of Queen Victoria and Prince Albert. Designed in the Italian Renaissance style, the view from the terraces reminded Prince Albert of the Bay of Naples. The gardens were the setting for private family time where the royal couple planted hundreds of trees and grew vegetables with their children. The Swiss Cottage, an Alpine-style chalet, was built in the gardens by Prince Albert for the education of the royal children.

Choosing Hydrogen Boiler For Your Home

Judy Boles Sep 10, 2022 0
Securing your home with proper locks is something that is often overlooked. Most people assume their homes are safe…
Home Improvement

Choosing Hydrogen Boiler For Your Home

Why Choose Premium Porcelain Tiles for Your Home